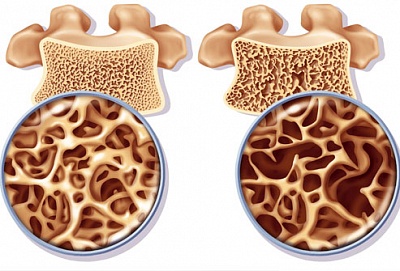 Osteoporosis, a disease characterized by progressive bone loss, has been the target of several studies in the past few years. It results in a much higher risk for fractures and might cause slower bone lesion healing. The aim of this work was to study the effects of Risedronate (allopathic medicine) and Calcarea phosphorica 6CH (homeopathic medicine) on the repair of bone lesions in male rats with osteoporosis induced by castration. Eighty-four three-month-old rats were used divided into four groups of twenty-one animals each. Three groups where castrated and one group was submitted to Sham surgery. One month later, cortical lesions were made in all animals' tibiae and, after one day, the different experimental treatments began according to the following groups: CR - castrated/Risedronate (1 mg/kg/day); CCp - castrated/Calcarea phosphorica 6CH (3 drops/day); CP - castrated/placebo and SP - Sham/placebo. The animals were sacrificed at seven, fourteen and twenty-eight days after the beginning of the treatments and had their tibiae removed. Digital radiographs of the tibiae were taken and analyzed in order to evaluate the optical density of the defect area. Then, they were decalcified and processed for histological and histomorphometrical analysis. The data were submitted to ANOVA, and to the Tukey and Dunnett tests (5%). The allopathic and homeopathic treatments led to different bone formation as regards remodeling and maturation aspects. Further research is necessary to access the resistance and quality of the newly formed bone.

Osteoporosis is a systemic disease, characterized by reduced bone mass and structural deterioration of bone tissue. It is considered a public health issue threatening a large portion of the population above 50 years of age7,13,19. Often presenting as a silent disease, it generally occurs asymptomatically and the afflicted individuals will be only diagnosed after the occurrence of some kind of fracture. One in two women and one in four men with age above fifty will have an osteoporosis related fracture in the course of their life7,13,19. The disease has a progressive course, with a tendency to entail fractures, and requires medical treatment1,3.

There are many options available to diagnose, treat and follow the progress of osteopenia and osteoporosis6,7,12. There are image-based exams that allow density quantification of trabecular and cortical bone in a restricted area or in the entire body; each one with a precise indication1,3,4.

Health professionals have been searching for substances that can help increase the density of osteoporotic bones. That can be achieved either by diminishing bone resorption or improving bone formation. Bisphosphonates are being used widely in diseases that present increase in bone resorption, such as senile or post-menopause osteopenia/osteoporosis. Studies indicate that they stimulate a higher bone density increase than other drugs used with the same purpose, such as raloxifene or calcitonin. Among bisphosphonates, risedronate shows a higher anti-resorptive effect2,3,8,14. Risedronate acts as an osteoclast inhibitor8,14. One hypothesis is that it prevents bone resorption by altering osteoclasts cytoskeleton's proteins or inhibiting cholesterol synthesis, which are necessary for the formation of the ruffled border, interfering directly with the fixation mechanisms of the osteoclasts to bone matrix3. The other hypothesis suggests that it induces the apoptosis of osteoclasts, by means of direct cytotoxic effects1.

In some bone diseases, alternative treatments other than the usual allopathic therapy have been used, including homeopathic treatments11.

Homeopathy proposes a new approach for comprehending and treating diseases, considering that a substance, once properly diluted and prepared, may induce symptoms that itself can alleviate. It defends cure by the similarity principle, presenting an antagonist ideology to conventional medicine which treats by the contrary law5,9,17. The goal of Homeopathy is to stimulate the body's own healing and defense mechanisms, leading its own cells to prevent and heal diseases5,18.

Calcarea phosphorica, formulated from calcium phosphate dilutions, is one of the homeopathic medicines prescribed for bone disease treatment17,18. Calcium phosphate, also known as hydroxyapatite, is the main structural component of bone matrix and comprehends around 85% of the body's phosphate9. Its homeopathic action heals several diseases related to the formation and remodeling of bone, therefore being prescribed for late bone callus formation, problems with fracture union, bone-deficient and abnormal growth, and for fractures followed by pain and paresis16,18. Its homeopathic cellular or functional mechanisms of action are still not documented, and even case reports based on clinical aspects are rare10.

When a fracture or lesion occurs, the body mobilizes cells such as osteoclasts and osteoblasts to repair the injured bone. The osteoclasts absorb the necrotic bone and remodel the new bone created by osteoblasts that proliferate intensively and produce the new matrix. These cells work simultaneously forming an immature bone callus, which shows progressive remodeling until complete replacement by mature bone7.

In osteoporotic bones, the osseous turnover does not occur in an adequate way because in the remodeling process bone formation is diminished and resorption is increased19.

In spite of the vast research existing on the evolution and treatment of osteoporosis there are few studies evaluating the process of bone repair in osteoporotic individuals. The full impact of osteoporosis on the consolidation of bone fractures is still not completely understood, and it is possible that the drugs used for its treatment may interfere with the repair process. Thus, studies on alternative treatments for osteoporosis are necessary, valid, can contribute to a better understanding of the disease and may improve the quality of life of osteoporotic individuals. There are many alternative treatment options that could offer equivalent results, with less complications and side effects, which deserve to be explored in more depth.

The aim of this work was to study and compare the effects of the allopathic medication Sodium Risedronate and the homeopathic medicine Calcarea phosphorica 6CH on the bone repair of male castrated rats through histomorphological, histomorphometrical and bone optical density analyses.

On the 7th, 14th, and 28th day of treatment, the animals were sacrificed with anesthesia overdose and had their tibiae removed and radiographed using a CCD sensor from the direct digital system RVGui, version 5.0 (Trophy Radiology, Marnela-Vallée, France) connected to the 65kVp X-ray Gendex 765DC (Gendex Dental Systems, Dentsply International, Chicago, IL, USA). The images where analyzed by Image Tool (UTHSCSA Image Tool version 3.0) to assess the optical density and localization of the wounded area.

The material was then decalcified using Plank solution for a period of six months and submitted to histological processing. Semi-seriated, five-micron thick sections were stained with hematoxylin and eosin and submitted to morphological analysis. Histomorphometrical analysis to assess the percentage of bone formed on the lesional area was done using Image J software (http://rsb.info.nih.gov/ij) by overlaying a 72 points (300 by 150 pixel) grid onto the central area of the wound, which was the last area to repair in the lesion.

All data were submitted to ANOVA, and to Tukey and Dunnett tests (5%).

Through histomorphological and histomorphometric analyses it was possible to observe that by the 7th day all groups showed a great bone callus constituted by trabecular bone, filling the defect and extending into the medullary space; the CCp group showed a smaller callus than the other groups. By the 14th day the callus resorption was intense in the SP group and mild in the CCp and CR groups. By the 28th day of the repair process the bone was more mature and changing to a lamellar aspect. The CR group had the thickest callus with a great amount of bone of trabecular aspect filling the defect and still extending into the medullary space (Figure 1). The CCp group displayed a thin lamellar compact bone without trabecular aspect, with some areas tightly connected to the adjacent cortical (Figure 2). The CP and SP groups showed a thin sheet of trabecular bone with areas of lamellar aspect (Figures 3 and 4).

The greater bone quantity in the CR group evidences Risedronate's pharmacological effects, leading to the prevention of bone resorption also in the bone formed in the callus. The amount and morphologic aspect of bone observed in the CCp group indicates that bone formation occurred, but its resorption was not prevented by the Calcarea phosphorica treatment. Although Risedronate led to a greater quantity of bone formation, it maintained a trabecular aspect until the 28th day, while Calcarea phosphorica presented a remodeling that led to a more compact, lamellar, mature bone, similar to that of a normal cortical (Figures 1 and 2).

The small quantity of bone and the poor remodeling observed in the CP group was probably due to a response to castration allied to the placebo treatment, leading to a low bone formation and high resorption (Figure 3).

In the SP group, considered the normal control, the remodeling and maturation process was not complete, resulting in trabecular and lamellar bone formation (Figure 4).

Comparing the radiographic data with the histomorphological and histomorphometrical analyses, it became clear that not only the quantity but also the quality and density of bone interfere with the values as well as the fibrous tissue interposed in the radiographic images, contributing to the optical density variations observed.

The Risedronate treatment influenced repair, leading to a greater bone quantity than that induced with Calcarea phosphorica 6CH. However, the bone formed under the Risedronate treatment displayed a resistance to resorption, keeping its trabecular aspect, while the Calcarea phosphorica 6CH bone changed from an initially trabecular to a lamellar bone at the end of the experiment.

The allopathic and homeopathic treatments led to different bone formation results regarding remodeling and maturation aspects. Further research is therefore necessary to assess the resistance and quality of the formed bone.

Repair evaluation through optical density analysis does not faithfully describe the bone callus' morphological course because it does not consider the differences between the trabecular and lamellar bones and also because it adds the fibrous connective tissue to the measurements.

We wish to thank the Coordination for the Improvement of Higher Education Personnel (CAPES) for financial support. 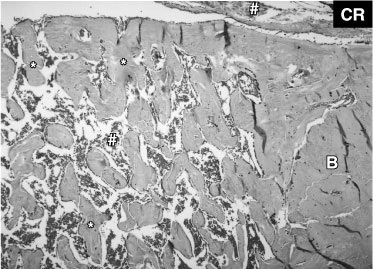 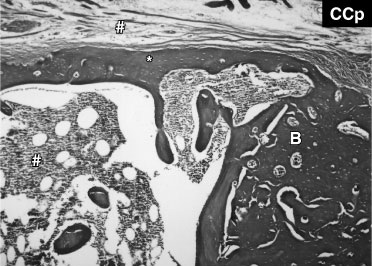 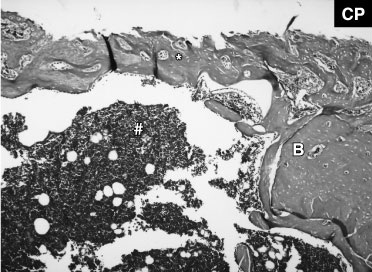 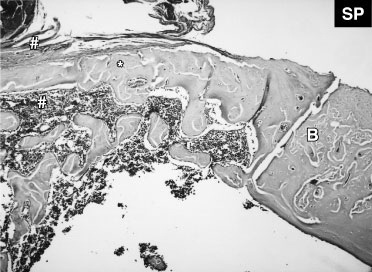